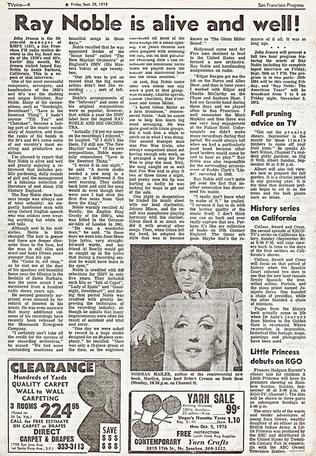 JIM WATT ON THE AIR

1975 on Treasure island. The only known footage of Bing Crosby doing a radio broadcsst

John Jensen doing his show on KMPX 107FM in 1978. Lots of vinyl on turntables. Not a computer in sight.

CELEBRITIES AND GUESTS WHO APPEARED ON KMPX

JOHN JENSEN AND HIS 78s

Announcer Rick Wagstaff does the news on his evening show.

KMPX 107FM signs off the air and its reported by the local news shows. A sad day for all.

Some of these airchecks have been made possible through links with our friends at the Bay Area Radio Museum whom we strongly urge you to visit.

They are located at

Others were donated by former listener Doug Miller.

Because of the size and your speed of transfer, please allow sufficient time for these to download. Most will be heard immediately. Thanks for listening!