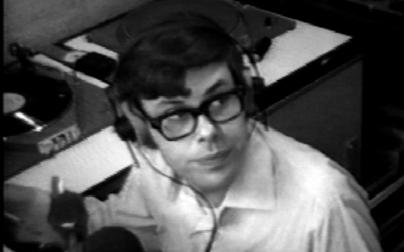 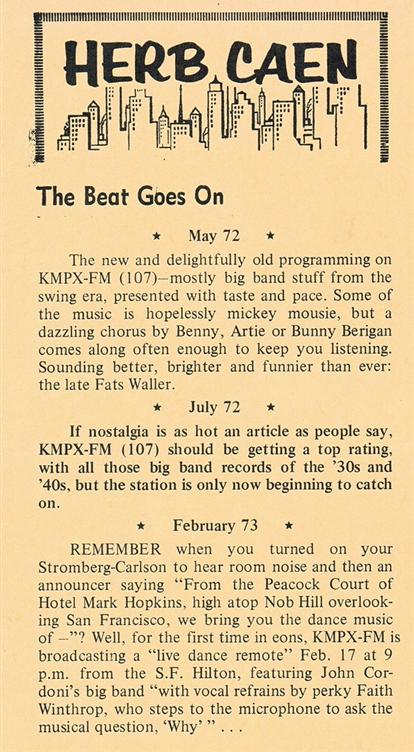 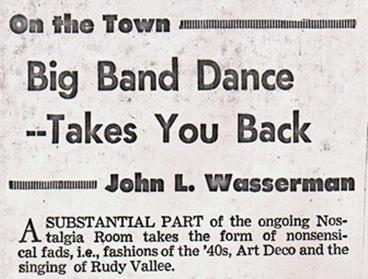 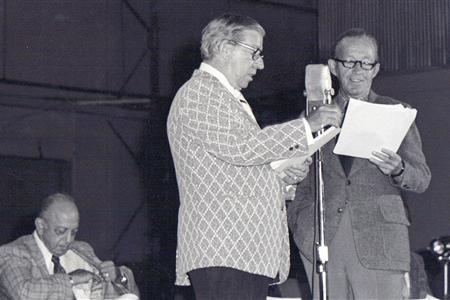 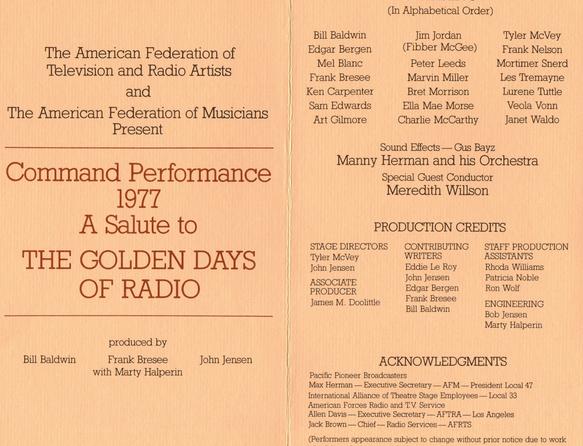 It can be heard in its entirety on the AIRCHECKS page 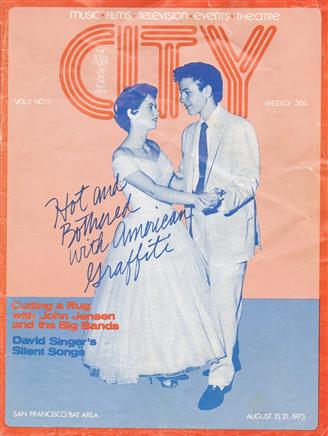 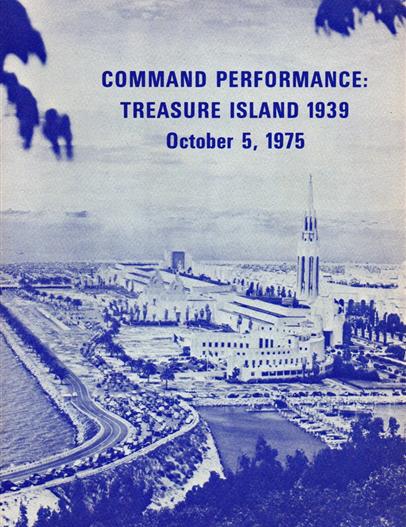 Jim Watt on the air 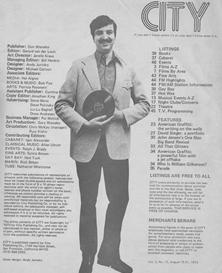 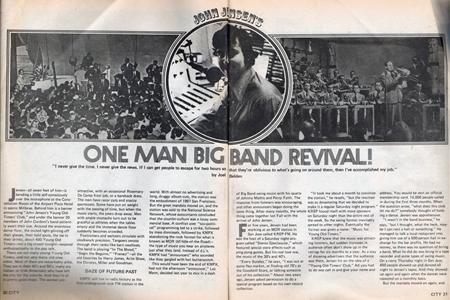 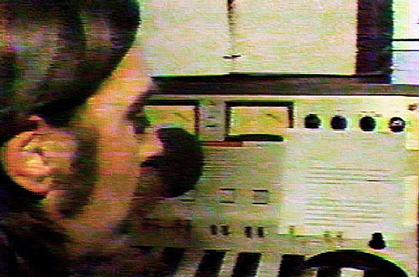 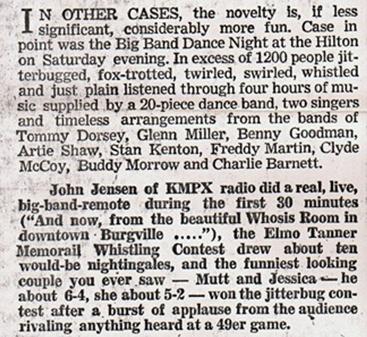 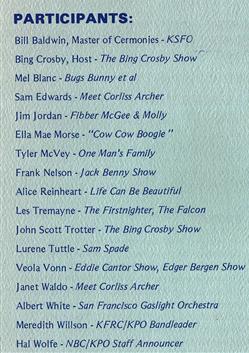 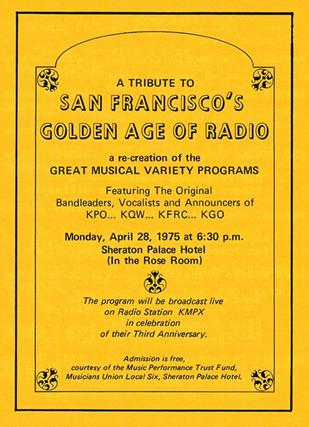 Bill Baldwin and Bing Crosby trading banter on Treasure Island. In the background is Mel Blanc. Go to Airchecks page to see and hear.

Rick Wagstaff on the air

Big Band KMPX launched in March of 1972 and consisted of mostly an eclectic selection of big band and swing recordings. Billy Holliday, Bessie Smith, Fats Waller and Benny Goodman got heavy airplay. However, because there was little semblance of order. the sound and pace were uneven with each announcer playing his own particular favorites. The result was some shows were all up-tempo and others laid back easy listening (drawing from three decades of music does have its challenges). The only point where there seemed to be consensus was the playing of Benny Goodman's hit, "Sing Sing Sing," which was heard so often it resulted in an edict posted saying it could only be played with permission.

A CHANGING OF THE GUARD

John Jensen had been doing a similar program on KREP 105.7 FM in the San Jose area for several years and when that station announced they were being sold and switching to an all-rock format, he was able to take the record library and many of his national and local advertisers to KMPX. In a short time he was asked to take over as general manager.

One of the first things established was a broader mix of music from those decades and a playlist formula established. Each hour required changes in tempo, genre, arrangement and composition so that listeners were never more than two songs away from their favorites. In addition, the station dabbled in playing programs from old time radio...the musical programs of that era proving especially popular.

The station had little money for promotion and depended on its one-of-a-kind uniqueness from the largesse of columnists and fellow broadcasters like Herb Caen, John Wasserman, Phil Elwood, Jim Eason and a host of others who promoted it heavily and freely.  Most important were the fans who got the word out to their friends and neighbors.

This was also a golden time for KMPX because so many of the bandleaders and celebrities of that era were still actively performing and frequently coming to the Bay Area. Entertainers like Bing Crosby, Benny Goodman, Stan Kenton, Anita O'Day, The Mills Brothers, Tex Beneke, Ray Noble, Johnny Mercer, Eubie Blake and Helen Forrest were interviewed by station personnel and their music frequently showcased.

In addition, KMPX featured live band remotes from various venues throughout the Bay Area. The Venetian Room of the Fairmont Hotel with Ernie Hecksher and his Orchestra, The Mark Hopkins with Orrin Tucker, The Ali Baba Ballroom with Sid Hoff, The Turk Murphy Jazz Band at Earthquake McGoon's, Albert White and his Gaslight Orchestra from the Hyatt Regency and Joe Venuti from the Great American Music Hall are  just a few examples of the many live broadcasts done during that period.

One of the most exciting aspects of the station were the re-creations of radio programs from the past. Jack Bethards, (who donated his time and talents as music director) put together a top-notch group of musicians to perform including many original entertainers from San Francisco's earlier broadcast history.

One of the shows was called The Golden Days of San Francisco Radio and recreated the radio studio orchestras of KPO, KGO, KQW and KFRC all in one special broadcast. Some of the participants were the original personnel.

When the film That's Entertainment premiered in San Francisco, Jack did a live remote with a full orchestra from Pine & Market featuring pianist Peter Minton.

Probably one of the most elaborate broadcasts staged by KMPX during that time was from a hanger on Treasure Island to salute the US Navy on its 200th Birthday. Public Affairs Officer Commander George Vercessi had approached the station about doing a live remote from their facility. The more it was discussed the more it was determined to make a first class production of it and recreate a 1940s Command Performance program as had been done for the troops overseas.

Again, Jack Bethards served as musical director and Meredith Wilson served as guest conductor leading the band through Seventy-Six Trombones. It was a phenomenal evening with over 5000 in attendance. In addition to being heard in the Bay Area, the broadcast was heard around the world over Armed Forces Radio.

Jack was also instrumental in getting the Tea dance broadcasts underway from the lobby of the Hyatt Regency Hotel...first with Albert White's Gaslight Orchestra and later with Del Courtney's. It became a Friday night ritual and remained on the air until the station signed off two years later.

Meanwhile the station music library continued to grow and soon approached a quarter of a million selections on LP, 45s, 78s, 16" transcriptions and tapes. Many records being donated by listeners who would drop them off at the station.

It was in late 1975 word came down that because the KMPX's owner (Ludwig Froelich) had passed away all five of his broadcast properties would be sold. Fortunately, KMPX was doing so well it was relegated to being sold last. Nonetheless, the station's days were numbered.

In the meantime, people like Fred Goerner, author of The Search for Amelia Earhart, and recently retired from KCBS reached out and offered to see if he could find backers to purchase the station in the hopes of saving the format.  He even volunteered to work the afternoon shift and quickly developed a new following.

Meanwhile other individuals were also reaching out hoping to acquire the property including Francis Ford Coppola who was convinced it was a viable format and saw expansion into live radio drama as well. He made a down payment on the property and promptly left for the Philippines to film Apocalypse Now.  Sadly, by the time he returned he was no longer able to complete the sale.

Meanwhile another potential purchaser surfaced: George Lucas. His attorney met with John Jensen and said George wanted to acquire the station---which looked like a strong possibility since irate listeners had formed the KMPX Listeners Guild to protest the possible loss of the format. It proved so vocal and effective that it threatened the sale.

Unfortunately the Listener's Guild settled with the FCC just days short of time running out on the deal. This was because Golden Gate Radio offered to keep some semblance of the big band format in place (at least temporarily) as part of the arrangement. In addition they would acquire the discarded call letters KMPX from the FCC to make it appear like there had been a format move to the new location. However there  was no goodwill provision included in the sale arrangement and John Jensen had already negotiated to take what had amassed to a  three-radio station library with him on the final broadcast day.

In September of 1978 it was all over, and although the newly called KMPX at 98.9 did play a greatest hits type format of some big band music and hired some of the former announcers in an effort to appear like the format had moved---without the in-depth library, the remote broadcasts and other trademarks of the old station, it was abundantly clear that KMPX 107FM was gone.

A short time later even Herb Caen announced he would no longer listen to 98.9. In 1982 the format disappeared.

Ironically, George Lucas' attorney had told John Jensen just before the station sale finalized that if he could find another station in the Bay Area for sale that George would still be interested in purchasing it. However since 98.9 kept some semblance of a big band format, it made the presence of a second big band station in the market financially unfeasible at the time.

NEVER HAVE SO FEW

KMPX 107FM was a success because of the work of many people who dedicated their time and efforts in keeping the station going.